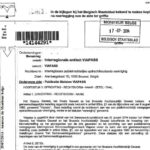 July 17 marks a festive time for everyone involved in Viapass. The organization celebrated that day its first birthday. On July 17, 2014 the constitutive act was published in the Official Gazette.
Since then a lot of work has been realized by the Interregional Entity. It started with the recruitment of an Administrator-General and the appointment of the Board of Directors. A public tender was launched and a Single Service Provider (Satellic) was selected and contracted. Meanwhile the works the development of the infrastructure and communications run at cruising speed. Next steps include writing a EETS Domain Statement and briefings with potential candidate Service Providers. In October, the first registrations of road users requesting an OBU will be opening. The toll charging system takes effect as of April 1, 2016.